I would like to introduce John Guenther whom I have known for several years. He sings in our church choir and is an avid amateur blacksmith. While in the federal government he was an aerospace engineer (GS-0861) and upon retiring was a program manager (GS-0301). Here is John’s story: 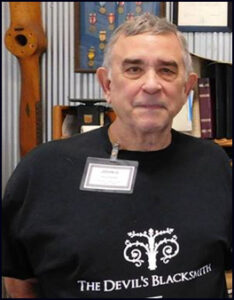 When searching for a job after graduation in 1970, I had applied with the Department of the Army, Aviation Systems Command in St. Louis, MO near where I lived.  Three years later after working elsewhere, I was interviewed and offered a position with the Army Aviation Systems Command that had offered higher pay and benefits than I had at the time (50% higher). It also allowed me to use more of my education.

During high school, being good in math and science I became interested in aircraft, rockets, and the space program. I chose to go to Parks College/St. Louis University because it offered a degree in aerospace engineering, was close to home saving living expense costs, and offered a trimester program that allowed graduation in less than four years. I graduated in December of 1970 with a BS in aerospace engineering.

I was hired as an aerospace engineer in the Maintenance Engineering Directorate, in an office that examined spare parts and supporting data to determine if the parts could be manufactured by more than one source. The intent was to increase competition and thus reduce cost of spare parts. I later moved to a systems office providing engineering support of fielded systems, including oversight of modifications to improve the aircraft operations and capabilities.

After working for an IL county highway department for several years, I was contacted by the Department of the Army, Aviation Systems Command, and interviewed for several positions. I was hired and started in November 1973 (got married in May 1973) and started in the Aviation Maintenance Engineering Directorate supporting the armies rotary wing aircraft fleets.

Over the years, I supported a foreign military sales program, development of the Black hawk, and later the OH-58D Kiowa Warrior. I moved into program management in 1980 working in several programs. I eventually became the technical and business chief of the SAcout Attack Project Office. During the next several years, I served as acting project/program manager. In the late 1990’s I completed a MS in Engineering Management (Univ MO). During this time frame, Program offices were placed under a new management structure – Program Executive Office (PEO).

In 1997, as result of base realignment, the Aviation programs and supporting organizations in St Louis were relocated to Redstone Arsenal, AL, and were merged with the Missile organization to form a new Aviation Missile Command in 1997.  Not long after I was named the deputy project manager for Scout Attack programs (AH-1/OH-58 and eventually the UH-1 as well). This position included management of a variety of personnel including budget, contracting, logistics, and engineering. Over the next ten years, I again served as acting PM on several occasions.

I ended my career as the deputy program manager for Scout Attack Aircraft, managing the AH-1 Cobra which we retired from service, UH-1 Hueys which were being retired as well, and the OH-58 Kiowa and Kiowa Warrior fleet which was deployed to support operations in Iraq and Afghanistan.  Additionally, I supported several foreign military sales cases. The position required overseeing the entire program, engineering, logistics, financial, and personnel, along with providing briefings to higher level organizations justifying budget requests and plans.

After 34 years of service, I retired in 2007. My decision to retire was based upon being eligible both in age, years of service, and feeling that the job was no longer rewarding.  This happens to everyone at some point and the causes are unique to everyone. When that time comes or is on the horizon, it’s time to plan to retire.

As result of my organizations efforts, part of the Kiowa Warrior fleet was deployed in desert storm and maintained 100% readiness and availability while operating in combat in Iraq. No other fleet came close.

Retirement has been much busier than I expected. Generally, I have been busy every day.

I do not miss going to work everyday, but I do miss my co-workers, some of whom I still stay in contact with.

Being retired, I enjoy the freedom to choose what I will be involved in. Since I was already an amateur Blacksmith, I have been in the shop doing projects that keep my mind active. Additionally, I’ve enjoyed singing and playing music, essentially, I am engaged with the artistic side of my capabilities which is relaxing. 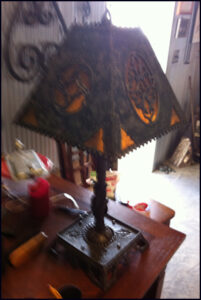 I became involved in Blacksmithing as a hobby not long after moving to Alabama. My youngest son, and I attended an event at the Burritt Museum on Monte Sano Mountain in Huntsville where a co-worker and older gentleman were demonstrating blacksmithing. This was on Saturday and they invited us to a meeting in Athens, AL where we lived. At that meeting, we joined the Alabama Forge Council. Since then I have taken classes and workshops learning blacksmithing. Having an artistic side, I’ve dabbled in many different artistic crafts as well as music, but none of the crafts has been as challenging and rewarding as blacksmithing. Since I have learned a lot, I’m now “passing along” to others, the blacksmiths craft. It’s always rewarding to take a piece of steel (Sometimes copper) and create useful and pleasing things. 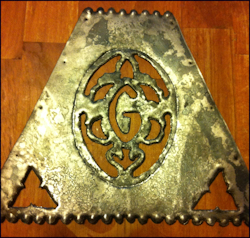 If someone is considering retiring, they should look at several things. First, are you enjoying your job? Or does it look like the job is becoming un-enjoyable? Second, are you eligible to retire? Third, will your retirement income allow you to live without the need to go back to work? Bottom Line, If the job isn’t enjoyable, or is headed that way, and you are eligible to retire, and can afford it, Retire!  Consider a job after retiring if you need something to do or need added income. There are many activities including volunteering that can keep you busy after retirement!

The information provided may not cover all aspects of unique or special circumstances, federal and postal regulations, and programs are subject to change. Our articles and replies are time sensitive. Over time, various dynamic human resource guidance and factors relied upon as a basis for this article may change. The advice and strategies contained herein may not be suitable for your situation and this service is not affiliated with OPM, the postal service or any federal entity. You should consult with school counselors, hiring agency personnel offices, and human resource professionals where appropriate. Neither the publisher nor author shall be liable for any loss or any other commercial damages, including but not limited to special, incidental, consequential, or other damages.

A Pennsylvania native, Betty Boyd moved to the Tennessee Valley in 1994. She retired in early 2012 after 30 years of Government service. Boyd was an Acquisition Manager/IT Manager/ Project Manager during her 30-year career. Boyd also served as a supervisor and team leader during her career. In 2012 Boyd founded a consulting firm, Boyd Consulting Services, which offers writing services to clients and companies. For more information about these writing services see the following website: http://www.BettyBoydWriting.com/. Betty attended Athens State University, Athens, AL and received a B.B.A. in Management of Technology in 2000. She received her Masters of Science degree from Syracuse University with a concentration in Information Management in 2007. Boyd is a certified Level III contracting professional and she received a Masters level certificate in Project Management from the National Defense University in 2008.